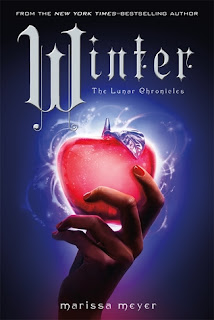 It's funny, the timing of books. It's so funny. I've been sitting on Winter for around about a year now. And it's been well over two since I reviewed Cress. You'll remember, I was not what you might call a "fan" of that book, which partly explains why I waited so dashed long to start Winter. It's just that I was such a genuine fan of the first two books. Scarlet is perfect, in my opinion. And as I was most displeased with Wolf and Scarlet's treatment in Cress (to say nothing of the, shall we call it "phoning in" of Cress and Thorne's characters), well. I had issues, guys. I had issues. But something continued to niggle in the back of my mind that Winter would be different. A return to form, possibly. A casting out of new lines, so to speak. Whatever it was, the Winter kairos all came together for me a week ago, and I basically whipped my way through the fourth installment in the Lunar Chronicles.

Ahem. Spoilers for the first three books are threaded through this review. Proceed with caution.

In many ways, Princess Winter is the focal point of the Lunar palace. Crazy Winter. Poor Winter. Beautiful Winter, they call her. And she is all of those things. With her exquisite face, marred only by the self-inflicted scars forced upon her by her nightmare of a stepmother. With her increasingly frequent hallucinations, of her limbs slowly turning to ice and breaking off, of the palace walls running with blood. Of a nameless horror no one else seems to see. And so her days are filled with fear, the only bright spot being her longtime guard and best friend Jacin. But even Jacin will not be around forever. With the imperial wedding approaching, and every one of her thaumaturges on high alert, Queen Levana has an eye out for any hint of insubordination in the ranks. And insubordination is just what Jacin has in mind when he realizes the depths of the Queen's plans for her detested stepdaughter. Meanwhile, unbeknownst to any of them, a rebellion is being mounted from within, as the ragtag group of rebels under Linh Cinder's command set their plan in motion to free Scarlet, clear Thorne, marry Kai off to the Lunar nightmare, and then promptly free him from doom by declaring Cinder the missing princess and rightful heir to the Lunar throne. Really, nothing could go wrong.


"It's not proper for seventeen-year-old princesses to be alone with young men who have questionable intentions."

She laughed. "And what about young men who she's been friends with since she was barely old enough to walk?"

He shook his head. "Those are the worst."

I quite liked what Ms. Meyer did with Winter herself. She is certifiable in a really interesting and believable way, and I remained fascinated as I found myself swinging in and out of lucidity along with her. In fact, my favorite descriptions in the novel were the ones detailing Winter's hallucinations and the incredible sacrifice she was making behind them. It is probably worth pointing out now that the rest of the descriptions in the book should could have been cut down by half. I'm dead serious when I say this 832-page door stopper should have been half as long as it was, and it wouldn't have had to sacrifice a whit of emotional impact or plot/character development. I'm super surprised it made it out the door as long as it did (and you know I generally prefer the longer the better), but the endless descriptions of the Lunar court and its denizens in their Capitol-like getups were simply unnecessary bulk and should have been jettisoned. I kept noticing this as the the tale went on, but then I would arrive at another lovely scene involving two or more of our winsome crew, and my frustrations would dissolve under their witty banter and very genuine charms. Which brings me to Carswell Thorne. You guys, he was there in this book. While being MIA off in buffoonery land in Cress, he was so very present and himself in Winter. Which thing made me smile hugely. Because I just knew he was that brand of awesome when he burst unceremoniously onto the scene in Scarlet. Which also leads me to Cress and how she came into her own here as well. Their arc was possibly my favorite of all of them in this concluding tale. My favorite line coming from Thorne's lips near the end, when all looked to be falling apart around their ears:

She looked like you. I'll say no more here, but you done good, Thorne. You done good.

Which brings me to my favorite couple of the entire series—Scarlet and Wolf. My heart may have clenched in pain just a few times at the way their arc played out. And if I felt like Wolf got a measure of short shrift when it came to his portrayal in this volume, I felt that Scarlet was just one hundred percent her blazing self, and I held her tightly to my heart the entire time. Because she was in no way compromised. She was acerbic and ruthless and loyal and fierce in the ways she always has been. Scarlet, as ever, makes the series for me. It was a worthy conclusion in most ways. Given my druthers, I would have exchanged reams of description for a bit more in the way of meaningful time with these crazy star-touched characters I have loved. But there was certainly no shortage of brilliant action, brushes with death, maniacal scheming, whip-sharp humor, and true love. And overlaying it all we were given Winter's sweet, always-generous outlook on her fellow human beings forced to eke out an existence against a backdrop of hatred, envy, joy, disease, and heartbreak (and, of course, interstellar warfare). It felt very much a timely message to me and one I cherish at the close of this year that has been what it was.


Winter reached over and pulled the pilot's harness over Scarlet's head.

Linkage
Carina's Books - "I loved Winter the very most."
Curiouser and Curiouser - "I was pleased to see that Meyer didn't make it easy for them!"
Nice Girls Read Books - "All in all, it was an exciting book… each character was vital in the plan and the ending couldn’t have been as it was without everyone’s input."
SBTB - "The Lunar Chronicles has come to a bloody yet satisfying conclusion."
Tripping Over Books - " I’m so very glad I got to see this rag-tag bunch of young people really kick some ass together."