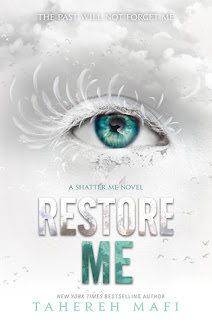 So we haven't talked about the three new Shatter Me books that we are getting from the lovely Tahereh Mafi yet, have we? I've been remiss. I know. I mean, I'm pretty sure you could have guessed that I'm positively delighted by the prospect. I was one of the ones happy with how and where she left things in Ignite Me. I know others were not. Which is why I think it's no small task Ms. Mafi has set herself in returning to this world and picking up the threads of her tale. But I'm along for the ride. That was never really even a question.

The first book is titled Restore Me and is due out next month! The sixth, to be exact. I do love this whiteout version of the set of covers we've got going for the series. Actually, it might be my favorite cover thus far. But my question for you today is have you read the first four chapters excerpt they released yet? I wasn't planning on it, opting to just sort of ride out my gentle anticipation until release day. But then I went and broke down and read them earlier today. And it basically injected a massive shot of adrenaline into my excitement for this next installment in Juliette's story. One of the reasons why is this book is told in alternating chapters from Juliette's and Warner's points of view. And, well, it kind of feels like the book gods have sent down a little gift just for me.

So what about you? Did you read the excerpt? Will you be picking up the new book?