Blog Tour Review + Giveaway | Ellie and the Harpmaker by Hazel Prior 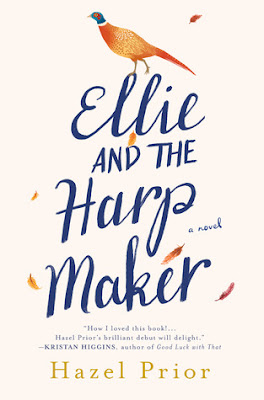 It is a pleasure to be a part of the blog tour for Hazel Prior's debut novel Ellie and the Harpmaker. I confess it was the title that drew me in when Berkley approached me about a possible review. It sounded a bit fey, a bit on the ethereal side. The comparisons to the exquisite Eleanor Oliphant is Completely Fine decidedly did not hurt. And so I readily accepted and opened my review copy to the first page.

A thought:
Some things are easier to hide than others.
A fact:
Harps come under the "others" category. So do small boys.

As you know by now, I am such a sucker for a good epigraph, and this one did the trick nicely. As did the novel's opening lines:

And so we are introduced to one Dan Hollis and the particular way that he sees the world and the people and objects and colors in it. Dan is a harpmaker and a bit of a loner with it. He converses with exactly two people with anything approaching regularity: the postman Thomas and his sister Jo. People have always been hard for Dan to understand, their emotions and motivations so frequently a mystery to him. And so he keeps very much to himself and his harps in a barn in the woods of Exmoor. Until one day, when a woman walks in as he works. A woman who is not so much a loner as so very lonely. Married to a man who does not understand her and left at loose ends for much of her time, Ellie Jacobs wanders and composes poems in her head and thinks of the items on her before-she-turns-forty bucket list. It just so happens that learning to play the harp has been on that list for some time. Taken with her sadness and her keen interest in his harps, Dan is moved to give her one as a gift. But Ellie is very certain her husband Clive will not approve or (or tolerate) such an extravagant gift from a strange man. Convinced that she should still learn to play (and perhaps unwilling to see her go), Dan offers to let her play the harp in his barn. Whenever she likes and can come. He also offers the services of a harp teacher he knows. A woman who he, in fact, dates. Or dated. The issue seems to be in some question, though Dan is unaware that it is. And so a friendship begins, one that will enlarge (and disrupt) more than just two lives.

I like this wood and respect it very much. For generations it was a yew tree, growing through the wind, rain and sunshine of life, expanding steadily in its gnarled, knobbly way. Birds perched in it and little creatures curled up in its roots. Then it became a pew and generations of people sat on it, praying. They must have felt all sorts of things going in and out of their hearts as they sat through baptisms, weddings, festivals and funerals. Now the wood will transform again, and one day some skilled harpist will draw music from it, music that will make hundreds more people feel things. Another miracle.

Prior's prose is light and lovely indeed. The story is told from alternating points of view, switching back and forth between Dan and Ellie. And it unfolds in a leisurely and natural manner, as these two individuals' rather small and isolated worlds expand to make room for more than they thought. I was quickly enchanted with both of them. Dan's observations on the natural world and the craft of making harps are beautiful. It is clear that Dan is somewhere on the spectrum, but that is never the point of anything. I so appreciated this treatment and how unfussily his character was presented. Ellie never comments on what some might term his quirks. He is just Dan. And she is Ellie, the Exmoor Housewife, as she dubs herself. Dan's obviously uncomfortable overtures of friendship are incredibly endearing because he wants to interact with her when he does not want to interact with most people.

By and large, Hazel Prior's writing is lyrical and very suited to this quiet, gentle tale. I did, at times, find Dan's portrayal to be a bit too childlike, for want of a better term, in that he seemed to waver back and forth between coming across as well-versed in the ways of adult relationships and simultaneously as utterly innocent. It felt frustratingly uncertain, and I did long for a bit more clarity in that regard. I understand that the author may not have wanted to make much of it, and I would be fine with that except a romantic relationship does develop, and so it did seem pertinent to the reader's comprehension of Dan's character. I also felt the final crisis was telegraphed a bit too strongly, wrapped up a bit too easily, and that Ellie came off as more of a damsel in distress than I believe she ever would be. That said, this is such a sweet story and absolutely worth your time. I very much wanted to see it (and them) through to the end, and I am looking forward to future books from Hazel Prior and to revisiting this one.

People say that certain sounds can melt a heart of stone. If there is anyone who has that sort of a heart―which I doubt (as far as I am aware hearts are made of fibrous materials, fluid sacs and pumping mechanisms)―if anyone does have a heart composed of granite or flint and therefore not at all prone to melting but just conceivably meltable when exposed to very beautiful sounds, then the sounds made by my cherrywood harp, I am confident, would do it. However, I had a feeling the heart of Ellie the Exmoor Housewife was completely lacking in stony components. I had a feeling it was made of much softer stuff. 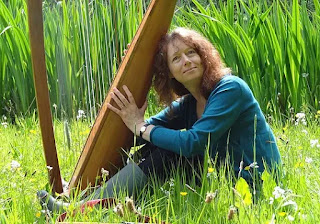 ABOUT HAZEL PRIOR
Hazel Prior is a professional concert harpist and debut novelist originally from Oxford. She has toured extensively with musical groups and has played at festivals and theaters around the world. Though her life has largely revolved around her music career, Prior always dreamed of becoming a writer. After submitting a short story to a magazine contest and winning first prize, her dream became reality, leading her to write her shining gem of a first novel.
CONNECT WITH HAZEL
Website | Twitter
BUY THE BOOK
Amazon | Barnes & Noble | The Book Depository
GIVEAWAY
To celebrate the book's release tomorrow, Berkley has kindly offered up a copy to one lucky reader. The giveaway is open to U.S. and Canada addresses and will run through Tuesday, August 13th. To enter, simply fill out the Rafflecopter. Good luck and happy reading!