April 25, 2020
I feel a bit giddy finally talking to you all about this series. If you'll remember, I fell madly in love with The Q when it came out a few years ago. Now, Beth Brower is writing The Unselected Journals of Emma M. Lion—a series of novellas set in London in 1883. Each volume is an excerpt from the incorrigible Emma's journals, and the first two volumes are already available with the third on the way soon. I think they'd make rather perfect pandemic reading. Humorous and charming down to their bones, they're just what the doctor ordered to lift your spirits in this uncertain time that just proves to be too much some days. If you're experiencing one of those days, I suggest giving Volume 1 a go (it's only 99 cents on Kindle, $4.99 for a trade paperback copy). It will surprise exactly none of you that I own print and digital editions of both volumes. 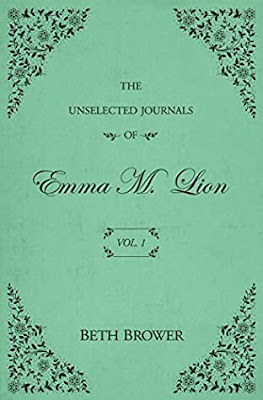 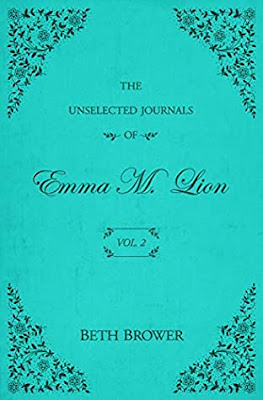 Miss Emma M. Lion has waited long enough. Come hell or high water (and really, given her track record, both are likely), she is going to take back possession of her rightful home from her odious Cousin Archibald. Which is how she finds herself setting foot off the train in London (at last) and making her way to the lovely (if rather unusual) neighborhood of St. Crispian's and her lovely (if rather unusual) home Lapis Lazuli House. In the wake of a number of personal tragedies, Emma has been mouldering in the countryside for years with her fatuous and extremely irksome Cousin Matilde, forced to cater to her every whim. Meanwhile, Cousin Archibald has been occupying the home her parents left her when they died and playing fast and loose with her inheritance. Emma is fast approaching her majority and bound and determined to take charge of her own life. But the tyrannical Archibald refuses to give up without a fight, locking up the library, and relegating Emma to the garret.To add insult to injury, it isn't even a whole garret but a portion of one, as Cousin Archibald walled off ten feet of the house, dubbed it Lapis Lazuli Minor, and rented it out to a Tenant in order to pay for his inexplicable morning robe habit. And so Emma is forced to roll up her sleeves and do battle for what should have been hers years ago. And in true Emma M. Lion fashion, she chronicles the ins and outs of her increasingly hilarious and frustrating life with both a critical eye and an abundance of wit.

I've arrived in London without incident.
There are few triumphs in my recent life, but I count this as one. My existence of the last three years has been nothing but incident.

Emma is a singular personality and one that grows on you immediately upon acquaintance. Her unselected journals are positively Wilde-esque, as she employs a cutting, grandiose, yet always self-effacing approach to her treatment of daily life. Every denizen of St. Crispian's is a fully-fledged character in their own right and one that I would follow beyond Emma's eye were I given the chance. From the hapless Scottish maid/cook Agnes to the truly bewitching (though he would abhor the term) vicar Young Hawkes, who was rather abandoned at his post and who mixes poetry and Shakespeare into his "sermons," cheered on by his rowdy Eton and Oxford mates in the back pew. From the habit that objects in St. Crispian's have of regularly going missing and reappearing in other people's homes to the specter of a Roman centurion who haunts the neighbourhood. To say nothing of the forbidding Duke of Islington, who is the unwitting and unwilling author of Emma's greatest temptation and The Tenant himself, with his quicksilver eyes, who moves into the other portion of the garret across the wall from Emma and begins exchanging notes with her written on torn off scraps of paper and slid through a crack between the boards in the wall. I mean, honestly. The entire host of them are revoltingly charming and winsome and they basically each made me want to tear my hair out by the roots at some points and hug them ferociously hard at others. Well, with the exception of Young Hawkes. He never makes me want to tear my hair out, and I always want to hug him. Not that he'd allow it, of course. As it stands, a number of shenanigans are in the works, a number of games afoot, and I would truly love to chat about them with any and all of you. Until such time as you've had a chance to swallow Emma's tales whole, I'll leave you with possibly my favorite exchange (which is saying something) between Emma and The Tenant (taken from Volume 2). Emma initiates the exchange, and The Tenant's responses are in all caps:

Do you have an obscure fact regarding cartography that would catch the attention of a man whose only other interest is the sweet pea?
I PRESUME THAT WAS A SERIOUS QUESTION?
It was.
THE HEREFORD MAPPA MUNDI IS ORIENTED TO THE EAST. PERHAPS A COMMENT ON THE SIGNIFICANCE OF THIS? IF HE IS AN ENTHUSIAST, ANY USE OF THE WORD MAPPA MUNDI SHOULD WORK IN YOUR FAVOUR.
Then he sent another:
FAR BE IT FROM ME TO PRY INTO YOUR PERSONAL BUSINESS, BUT ARE YOU CERTAIN THIS IS A MAN YOU WISH TO IMPRESS?
I laughed.
He is moneyed, with a good deal in the funds, three country estates, and would spend his life consumed by cartography and the sweet pea, thus proclaimed an eligible candidate. Alas, not for me, but my cousin, a reality I fully accept.
USE THE WORD THEORY IF YOU CAN. MEN WHO THINK THEY KNOW A GREAT DEAL FIND SATISFACTION FROM THE WORD.
THE VERY LITTLE I KNOW ABOUT YOUR LIFE EXHAUSTS ME.

These journals are a joy, I tell you. I can scarcely wait for more.
Tell Me More
Goodreads | Amazon
Flowers of Quiet Happiness review