The Luxe by Anna Godbersen 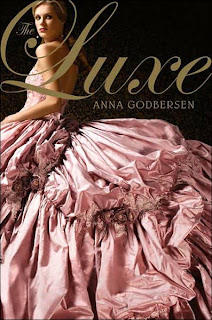 Another Christmas gift, and one I wanted to read very much when it first came out, but shied away from somewhat after reading several reviews comparing it to the Gossip Girl series and stating that the writing left rather a lot to be desired. Oh, I thought sadly. That's too bad. It looked better than that. So I just admired the cover from afar, and that of the sequel Rumors. I probably would have just gone on ignoring the series if my mom hadn't given me a copy of The Luxe. I'm glad she did.
The prologue begins with Elizabeth Holland's funeral. The darling of upper crust Manhattan society, her sudden and inexplicable drowning in the Hudson shocks everyone from her frozen fiance Henry Schoonmaker to her scornful maid Lina Broud. The story then immediately jumps back several weeks to show us how events came to such a strange state. You think Elizabeth is going to be the main character, but she's not. She's not even very likable. Quiet, passive, perfect. Perfectly boring. That's Elizabeth. And that's why her best friend Penelope Hayes hates her. Everyone assumes Henry and Elizabeth would be perfect together, while Penelope is determined to have him for herself. And if you're wondering right now if the whole thing is as Peyton Place as it sounds thus far, the answer is yes. Yes it is. It's a roiling sea of love, despair, social climbing, and backstabbing. In perfectly lovely period costumes. It's hypnotic.
The story spends time going back and forth between five Victorian teens: Elizabeth, Henry, Penelope, Lina, and Diana (Elizabeth's younger, much more likable sister). And for awhile I kept thinking, Why am I reading this? These characters are perfectly awful. But then Diana became cool. Or rather I could tell she was going to become someone who was going to be cool. So I was reading it for Diana. The others I could take or leave. But then Henry started showing some good sense and just the slightest hint of a backbone, despite his apalling sense of entitlement. So I was reading it for Diana and Henry. And the dresses. Oh, the dresses. And because I enjoyed seeing Penelope swallow her own tongue when she finds out a certain couple are engaged. And, in the end, it was like watching a train wreck. A beautiful, awful train wreck. And I couldn't tear my eyes away from it. I had to run to the library to get a copy of Rumors to see What Happens. That review to follow shortly.
Links
Chicklish Review
Em's Bookshelf Review
Jen Robinson's Book Page Review
The YA YA YAs Review
The Story Siren Review