September 25, 2009
I think it's time for a giveaway, don't you? Thanks to the generous people at Flux, I have one copy of Ballad by Maggie Stiefvater to give away to one lucky commenter! 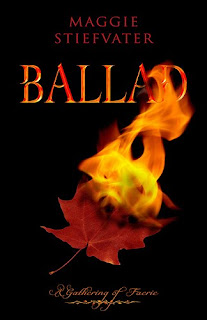 I'm very excited about this giveaway because I thought it was such a great read and an excellent companion novel to Lament. You can find my review of both books here and here, as well as an interview I did with Maggie last month. I've posted Maggie's awesome book trailer here before, but here it is again because it's totally worth a second viewing.
Maggie has since put together a playlist for Ballad, which you can also check out here.
The rules for the contest are simple. To enter please leave a comment telling me your favorite ballad or love song. One extra entry if you become a follower, two for current followers. Make sure to leave me a way to contact you. The giveaway is open to U.S. and Canada residents only and closes on October 1st--Ballad's official release date!