The Reluctant Heiress by Eva Ibbotson 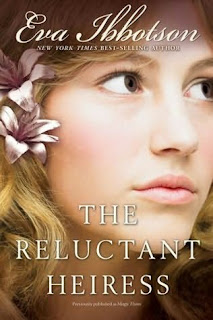 I was so excited to find another Eva Ibbotson book! Awhile back I blew through the wonderful A Song for Summer, A Countess Below Stairs, A Company of Swans, and The Morning Gift. When I surfaced again, I found myself really hoping the magic spell wouldn't end there. Happily there was one more sweet historical in store for me. The Reluctant Heiress is a (retitled) re-issue of Ibbotson's Magic Flutes, which was originally published in 1982. It is set in the 1920s and revolves around the outrageously funny and touching members of the Viennese Opera Company, in particular a young woman named Tessa who eats, drinks, and breathes music and is the heart and soul of the company.
First things first. The prologue opens with the following lines:

They were both born under the sign of Gemini and for those who believe in the stars as arbiters of fate, this must have seemed the link that bound them. She herself was to invoke the heavens when at last they met. "Could I be your Star Sister?" she was to ask him. "Could I at least be that?"
Certainly it would seem to need the magic of star lore to link the life of the tiny, dark-eyed Austrian princess--born in a famous castle and burdened, in the presence of the Emperor Franz Joseph, with a dozen sonorous Christian names--with that of the abandoned, gray-blanketed bundle found on the quayside of a grim, industrial English town: a bundle opened to reveal a day-old, naked, furiously screaming baby boy.
Her birth thus was chronicled, documented, and celebrated with fanfares (though she should have been a boy). But his . . .
It was the merest chance that he was found at all . . .

The narrative alternates between Tessa and Guy's stories as they work their way toward meeting one day in the bowels of the theater when Guy walks in on a weeping Tessa, who (an absolute martyr when it comes to opera) has just chopped off all her beautiful hair to provide a wig for the diva to wear in that night's performance. From there their lives intersect at more or less regular intervals and these two individuals with such wildly different backgrounds unexpectedly become friends. The one thing they share is a love of music. And music permeates the pages of this book, wrapping itself around you as you read. Tessa has turned her back on her past and made the opera the focus of her entire life, while Guy has all but nullified his humble origins by molding his life around the pursuit of wealth and power. When the woman he's loved since he was a young student at Oxford is suddenly widowed and back on the market, he lays out an alarmingly elaborate plan to woo and win her back and gift her with the life he believes she deserves. Unsurprisingly, no one is who they seem to be and that presents several sticky problems for our protagonists to tackle.
Opening up an Eva Ibbotson book is like biting into a hot biscuit smothered with butter and jam--at once perfectly satisfying and extremely comforting. Similar to A Countess Below Stairs there are few, if any, unpredictable events in this story. But that's not really what it's about. It's about those arresting passages you come across at just the right moment and think--perfect. Absolutely perfect. Similar to A Song for Summer and A Company of Swans the characters' love of art and nature fairly leap off the pages and it's hard to resist their charms and not wish you lived in a time and place where ancient royalty glided about crumbling castles and Mozart was god. In fact, my favorite bits in this book are the ones where the characters talk about Mozart and Beethoven and the way music makes life worth living. I liked Tessa and Guy quite a bit. I wish they had a few more scenes together. There is one point near the end of the story where they find themselves alone in the same place for the first time in months and months and their quiet conversation is exquisite. The story needed just a few more of those intimate moments to really cement the arc of their relationship and move it from like-minded acquaintances to soulmates. That said, I thoroughly enjoyed my read, laughed several times, had tears in my eyes twice, and fell in love with each and every member of the opera company. For Ibbotson fans, this volume is not to be missed.
Linkage
A Sea of Pages Review
Books, books, books Review
I Read Romance Review
Oops...Wrong Cookie Review
Sue's Book Review
Word Wenches Interview