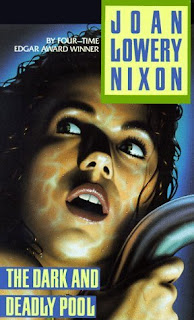 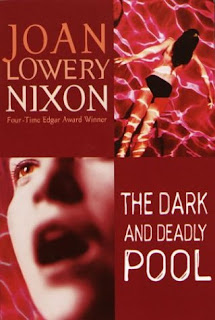 I went through a pretty good Joan Lowery Nixon phase when I was about twelve or thereabouts. Along with Lois Duncan, Ms. Nixon kept me well supplied with tense, easily digested mysteries about young girls who encountered the horrifying and the deadly on a regular basis. As I was in the process of expanding a bit on my Nancy Drew addiction, I basically ate them up with a spoon. I collected used copies of most of Nixon's books and, at one point, had quite a group of them on my shelf; now they've been whittled down to the most memorable, sentimental few. Of her mysteries I held on to Secret, Silent Screams, The Kidnapping of Christina Lattimore, and The Dark and Deadly Pool. And while the first two are probably better crafted, more complicated tales, The Dark and Deadly Pool is my favorite because of its offbeat and lovable main characters--Mary Elizabeth Rafferty and her friend Fran or, as I like to call him--ManFran.

Mary Elizabeth takes a summer job at the super ritzy Ridley Hotel health club. Initially she thinks it will be the perfect place to spend those hot summer days. She's tall for her age, something of a klutz, and known to trip over or destroy the various objects in her path. Life has just gone that way for her over the past sixteen years. Secretly she dreams of becoming an orchestra conductor and when she's particularly zoned out she'll practice conducting in her head. Never mind the fact that she can't play an instrument to save her life and, at this point in time, she has all the confidence of an agoraphobic in a shopping mall. To make matters worse, the jittery Mary Elizabeth is closing up one night and sees a body rise up out of the pool, gape at her, and disappear once more under the surface of the water. No one will believe her, of course. Not Lamar the chief of security, not Art Mart the health club director, and not Tina her tough but friendly co-worker. Fortunately, she runs into (literally) another member of the staff who does believe her. A boy named Fran (short for Francis Liverpool III) who is shorter than her but makes up for it with an abundance of charm and determination. Together Liz and Fran attempt to solve the mystery of the dark and deadly pool...
Somehow this cozy little mystery has worn fairly well over the years. I loved it when I was twelve for its quirky main duo and for its slightly campy-creepy feel. And I still love it for those same reasons. A favorite passage:

Clutching the health-club keys tightly, I flipped off all the lights as fast as I could, locked the office door, and sprinted toward the door that connected the health club with the hotel.
So much for plans. In the darkness I slammed into a body that made an oofing sound and wrapped its arms tightly around me. Down we dropped, legs thrashing. I fell on top of whoever it was, and he let out a yell.
"I have a weapon," I said fiercely, wondering where my handbag and key ring had landed. "Don't move, or you're dead."
"I hope you move. You're squashing me," he grunted.
I recognized his voice. "Fran? What are you doing there?"
"You knocked me down." His words came out in gasps. "Get up, Liz! You're heavy, and your elbow is in my stomach!"
I quickly rolled away and sat up. Fran sat up too. My eyes were becoming accustomed to the darkness, so I could see Fran rubbing the back of his head.
"I'm sorry," I said. "I didn't know you were in the club."
"I thought I'd help you close up," he said. "I guessed that you were still a little jumpy."
I was really touched. "Fran," I said, "what a nice, kind thing to do."
He reached for my hand and held it. His hand was warm and strong. "What kind of weapon?" he asked.
"What are you talking about?"
"You said you had a weapon. You said if I moved you'd kill me."
"Oh," I said. "The health-club keys, but I dropped them along with my handbag."
"How do you key somebody to death?" Fran asked. He put an arm around my shoulders and moved closer.
"Don't be so literal."
"Don't make threats you can't carry out." Without a pause he added, "Very interesting. Your height is in your legs."
"What?"
"You have very long legs," he said, "which look good in shorts. I noticed. But all legs aside, the point I'm trying to make is that when we're sitting down our bodies are the same height. See?"
"Oh," I said, "you're right."
"So maybe we could meet in a cafe--something elegant, like Flakey Jake's or Showtime Pizza."
"Those aren't elegant. They're fast-food restaurants."
"Look, I don't have all the money in the world. You'll have to restrain your greedy impulses."
"My what?"
"Pay attention. You can be seated, looking lonely and romantic, and I'll come in and sit across from you and take your hand."
"Come on, Fran--"
"I'm trying to."
"Listen--"
He just smiled. "See how it works? We can both be sitting down the whole time, and relative heights won't matter."
"What about when we leave?"
"One of us will just have to leave before the other one."
"It will be me," I said. "I'll arise, still looking lonely and romantic, and drift out of your life."
"We're losing something here, "he said. "Let me think of another example."

Pretty cute, huh? There's something about the taller, stronger girl being courted by the smaller, Puckish boy that appeals to me. Throw in the fact that they run around rather ineptly fighting crime together and you've got yourself a winning combination, my friend. Nothing in the way of surprising or truly deep (except the, uh, pool), but everything in the way of endearing and charming. Every now and then I still pull out my old copy and settle in for a couple hours with Mary Elizabeth and ManFran. And you know what? They're still good company.
Retro Friday Roundup
Charlotte's Library Reviews The Riddle-Master Trilogy by Patricia McKillip
Bookworm Nation Reviews Harry Potter and the Sorcerer's Stone