Retro Friday Review: Lady of the Forest by Jennifer Roberson 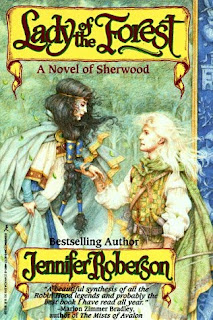 Ever since I highlighted The Outlaws of Sherwood a few Retro Fridays back, I knew I'd have to dedicate a future entry to my second favorite Robin Hood retelling--Lady of the Forest byJennifer Roberson. This is Roberson's second appearance as I've talked about her Sword-Dancer saga here before, but her historicals are written in such a markedly different style from her SF/F that I felt they deserved their own post. I also discovered her through this book and will always be glad I picked it up that day, despite how thick it was, and despite the cover featuring Marian's neverending braids. Actually, I think it's quite a pretty cover. I love the font, the banner-style heading, and the general composition. But those braids...
Marian of Ravenskeep has lost her father. Cut down while on Crusade, all she got was a letter informing her of his death. No explanation. No words of condolence. Merely the fact that he is gone. And then Robert of Locksley returns home from Crusade. Marian attends the lavish homecoming the earl his father throws for him in the hopes that Sir Robert knew of her father and might have some bit of information to give her about how he died. The moment they lock eyes, though, she knows it is hopeless. The young man she remembers as a solitary, withdrawn youth from her childhood, has grown into a forbidding man with no time for pleasantries. No longer the innocent young man she remembers, his eyes are black with shadows. Haunted by the atrocities of war, by his years of captivity within Saladin's walls, Robin of Locksley has not one ounce of available energy left to shoulder the burden of a young woman's grief. Until her face breaks through the fog of indifference he surrounds himself with and he remembers the promise he made and the message he failed to deliver.
Roberson wrote this Robin Hood retelling, for all intents and purposes, as a prequel to the standard tale. The subtitle reads, "A Novel of Sherwood," and it is apt as the meat of this story follows all the traditional central players as they first meet, find their way to Sherwood, and become the people they need to be to need Robin. To want to join him in Sherwood and take their lives in their hands by defying the Sheriff of Nottingham. Throughout the story the viewpoint shifts between each and every one of the major players (and a few minor ones to boot). But Marian's story remains the focus and I will always be fond of it for that fact alone. This Marian displays quite a bit of growth from beginning to end. She is determined to "grow a spine," as she puts it, and I love how she accomplishes her goal. And how she and Robin fit so well. The Robin of Locksley we meet here is a more brittle Robin than you often find. He has suffered and fought and killed on behalf of the king he loves and when he is returned to England he has little idea how to act, how to take up the reins of his life again. Where he is weak, Marian is strong and vice versa. Every character is tweaked a little from their more familiar forms in this version and you may be surprised at the treatment of some of the old favorites, including Will Scarlett and Much the miller's son. There is honor and betrayal, greed and hope and certainly no shortage of characters to hate. But there are more to love. This is an earthier, much blunter take than many I've read and the harsh realities of rank, position, gender, and power don't get the glossy treatment. But by the end Marian is chock full of spine and Robin is a hero. This is a favorite re-read of mine. I never fail to find it refreshing and perfectly enjoyable. Recommended for fans of historical fiction, historical romance, and (naturally) Robin Hood.
Retro Friday Roundup
Bookworm Nation reviews Jane Eyre by Charlotte Bronte
Linkage
That's All She Read Review
The Book Lover Review