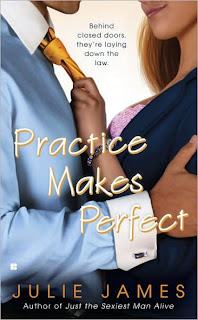 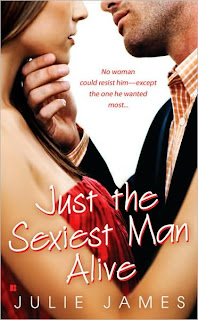 Okay, as you all know I am not very well-versed in the romance genre. I took my first dip in last summer when The Book Smugglers dared me to read Loretta Chase's Mr. Impossible. While I had a great time completing the dare and reporting on it, the book was not my cup of tea and I wasn't so taken with the experience that I wanted to repeat it again just yet. I have, however, casually been keeping my eye out for my next attempt. Based on my reactions to Mr. Impossible, Ana recommended giving Julia Quinn's What Happens in London a shot, but every time I go to the library it's been checked out. This is probably a good sign. And so I figured I'd just wait for that one to come back in and give it a go. Then, as part of the Smugglivus Feats of Strength, Thea read and reviewed Julie James' Practice Makes Perfect--one of Ana's favorites of '09. And it was like the this is the next one light went on in my head. I think it was Thea's comment:

I was a little nervous going into Practice Makes Perfect - but from the first page of this delightful book, I found myself immersed and entertained. Ms. James' novel is romantic comedy at its finest.

How could I resist that? Especially when she followed it up by noting that there is a decided lack of "mush" and play-by-play sex scenes in the book. In short, it sounded made to order.
Payton and J.D. have worked at the same Chicago law firm for eight years. And for eight years they have been at each other's throats. Opposites in almost every way, Payton is a liberal vegetarian, attended a public university, and worked her way up the corporate ladder on pure talent and grit. J.D. Jameson, on the other hand, is as old money/conservative as they come, grew up privileged, attended an Ivy League school, and considers himself a shoo-in for partner. Since they specialized in different kinds of law, they are fortunate not to have to work with each other too often. The fragile balance is thrown off kilter, however, when they're assigned to the same case and forced to see if they can put aside their animosity in favor of securing those partnerships they've both been counting on.
I was still hesitant as I cracked open Practice Makes Perfect. And for the first few pages I still wasn't sure. The somewhat blatant clichés (liberal feminist vs. conservative money) worried me and I was concerned the predictability would end up bothering me and that the characterization would be slapdash at best. But then Payton and J.D. start interacting. And the dialogue...well, it's incredibly witty. They excel at insulting each other and concocting hilarious pranks to play. Having known and hated each other so long they know all the right buttons to push. But my favorite part is how the wit doesn't end when they stop talking. Ms. James stays in their heads just long enough that we get that sort of running self-editorializing of thoughts that we all do and that is simply hilarious to be in on. The other aspect of the book I enjoyed was all the legal shoptalk. Ms. James herself was a lawyer for many years and it shows in the writing. I appreciated how interesting it was and it definitely lent the story a welcome authenticity.
I read Practice Makes Perfect in one night and enjoyed it so much I immediately went out and hunted down Julie James' first book--Just the Sexiest Man Alive. As the title might indicate, this one features a ridiculously famous actor who has recently been named People magazine's Sexiest Man Alive. Jason Andrews is on top of the world and believes nothing is out of his reach. Then, while preparing for his next legal thriller, he agrees to spend a day with an actual attorney to help get into the role. Taylor Donavan is only in L.A. for a few months. On loan from her law firm in Chicago, she's helping out with a high stakes sexual harassment case. Then she's asked to do a "favor" for one of the partners and babysit Jason Andrews for a day or two to show him what it's like to be a real lawyer. Furious at this monumental waste of her time, and still smarting from breaking off her engagement, Taylor is determined to hate the big, dumb movie star. For his part, Jason is intrigued by the existence of a woman who appears to actually dislike him. And from that point, things pretty much go the way of the inevitable.
What can I say? These books are bibliocrack. In the most basic sense of the term. Absolutely addictive, hilariously entertaining, irresistible romantic comedies. I ate them up with a spoon and consider my time reading them very well spent, especially as Thea was exactly right. They feature smart, independent protagonists who are good at their jobs and have interests and goals in life outside of the romantic. And these protagonists are drawn to each other because of these qualities. And, okay, yes, they're all pretty much aces as far as the hotness factor goes, but their connections are real and you want them to understand each other and realize what's there under the hot lawyer and/or actor surface (take your pick). The writing is clean and even, the dialogue shoulder-shaking-giggles-inducing (though expect a fair amount of language), the best friends good and true, the tension sizzling, the intimate scenes minimal and fade to black, and the endings just the way you want them--decidedly happy. If you're in the mood for any or all of the above, you might as well grab yourself a bowl of popcorn and settle in, because you're in for a rocking good time. I myself can't wait for Ms. James' third book, Something About You, which is due out March 2nd.
Linkage
Babbling About Books Review
Book Binge Review and Review
The Book Smugglers by Ana and by Thea and Powerpuff Review
Books Lists Life Review
Closet Writer Review
Dear Author Review and Review
Gossamer Obsessions Review
Janicu's Book Blog Review and Review
Lusty Reader Review
Monkey Bear Reviews
The Thrillionth Page Review and Review