Crocodile on the Sandbank by Elizabeth Peters 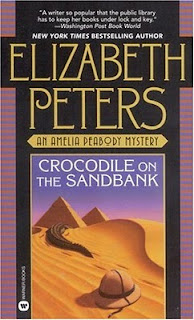 It's hard to say exactly what kept me from diving into this series for so long. It's been on my radar for simply ages and everyone who's anyone appears to love it dearly. I first became aware of Elizabeth Peters back in the Readerville days, and I did give the first book in her Vicky Bliss series a go awhile back, with fair to middling results. But the consensus does seem to be that the Amelia Peabody books are superior and that, given my love for all things historical and mysterious, I should have read them years ago. So when I saw a copy of Crocodile on the Sandbank

just sitting there meekly on my local library's book sale shelf, I couldn't pass it up one more time. I confess to being a bit nervous, but quite excited, about what I might find inside. On a side note, I had absolutely no idea this book was first published in 1975. Of course, there are now something like 19 books and counting in this venerable series, so I should have guessed it started awhile back.
Miss Amelia Peabody is a singular soul. The only daughter among scads of sons, she is the one who took care of their father at their country estate. While the boys were off living their lives, making their fortunes, Amelia was left at home with her father. And so it was to her he left his fortune upon his passing from this world. Shocked, Amelia decides it is high time to start living her life. Unabashedly intelligent and unreservedly blunt, she sets out putting her affairs in order and heading off on the adventure of a lifetime. Having always wanted to explore the antiquities of ancient Egypt, she sets off for that land. While on a break in Rome, she quite literally stumbles across a young woman on the brink of death. Nursing her back to health, Amelia determines the young, disinherited heiress Evelyn will make the perfect traveling companion and the two set off for Cairo. Once there, they make the acquaintance of the inimitable Emerson brothers. Quiet and affable Walter and irascible Radcliffe are excavating down the Nile and Amelia and Evelyn soon find their way to their camp. Unfortunately, they are unknowingly being tracked by a highly unusual enemy. And the four of them will have to combine forces in order to stay alive.

This is a charming debut in what has become a very long-running and much beloved series. It's hard not to cotton onto Amelia right away. She's forthright to a fault and always speaks her mind. I found myself delighted with how little patience she has for stupid conventions and even stupider men. As it happens, Emerson has a similarly low tolerance for incompetence, though rather a low estimation of women. The two of them together are combustible and hilarious. I wish they had shared more scenes, though I'm aware this is just the beginning and several people have assured me it only gets better from here. And while it was a fun and quick read, it did lack some of the depth of character I've come to crave in my historical fiction. The secondary characters were quite spare, so I'm happy to hear things progress apace in future installments. Amelia's friendship with Evelyn does have its very sweet moments, particularly as Amelia has had very little contact with other women of her age. And her growing attachment to the stubborn Emerson certainly whets the reader's appetite for more. This is a light and witty Victorian adventure mystery and it made me laugh several times. I have hopes for the rest of the series and will definitely be picking up the second book in the near future. For those of you who've immersed yourselves in this series, which ones are your favorites? And do the storytelling and character arcs really hold up across so many books? I'm curious.