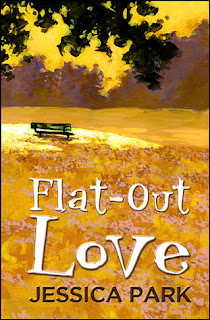 I bought the ebook version of Flat-Out Love when I saw what a good deal it was right now. I'd seen it read, reviewed, and loved here and there for several months now, but for some reason nothing pushed me over the edge into trying it out myself. I know. Then when I found myself in between books and casting about for the next great thing, I remembered I had it on my nook and pulled it out to see how we got on. The answer is: famously! This is one of those books you kick yourself for not picking up sooner and then attempt to make reparations by singing its praises in the hopes that others will be quicker and savvier than you. I also just ordered the paperback, because I can tell that a digital copy is not going to be enough. This is one I'll want to have on my shelves for lending and rereading and the like. Plus, it's pretty, that cover. I mean, it kind of fills me with a maelstrom of emotions after the fact. But pretty it is. This is my first book by Jessica Park and I'm eager to find out what she's working on next and what we have to look forward to.

Julie is a bit down on her luck already and it's only her first day in Boston. She's come all the way out east to go to college, leaving her mother and the Midwest behind. But it turns out using Craigslist to secure an apartment wasn't the brightest idea. Fortunately, after one harried phone call with her mother and one minor meltdown in front of the burrito shop that was supposed to be her apartment, Julie is saved when the son of her mother's old college roommate shows up. Her mother's old roommate Kate and her family live in town and offer to let Julie stay with them until she finds an actual apartment where she will not be mugged or killed. Putting aside the fact that she really didn't even know Kate existed, and that she's just about as different from her mother as it's possible to be, Julie settles in to life with the eccentric Watkins family. And eccentric doesn't even really touch the surface when it comes to these people. Kind and generous, they are also incredibly . . . different. What with professor parents Erin and Roger never being around at all, MIT student Matt's over-the-top nerd shirts and doubtful social skills, and 13-year-old Celeste carting around a life-size cardboard cutout of her big brother Finn, whom she has dubbed Flat Finn. Between searching for a place to live, trying not to make a nuisance of herself, and navigating the obviously treacherous waters going on in this family, Julie has her work cut out for her. Doesn't help that she appears to be developing a crush on one far-flung member of the family along the way . . .

What is it about me and books set in Boston? It may come from having devoured a large quantity of Ellen Emerson White books as a young adult, but hand me a book about a girl and Boston and I am one happy clam. The hilarious thing is, I've never even been there! I dream about parts of this city I feel like I know like the back of my hand, I've read about them so many times. But I have yet to see them with my own eyes. One of these days . . .   So, rather unsurprisingly, I fell in love with Boston and the Watkins family right along with Julie. Quite frankly, it's impossible not to. They are wonderfully obtuse and endearing. The banter between Julie and Matt has a hilariously natural flow to it, as she ribs him for being hopelessly uninterested in Things Not Math, and he responds in kind teasing her for being too preoccupied with pop culture and caffeinated drinks and other lower aspects of life. Honestly, it is such a good time following the way Julie organically becomes a part of the family. She takes a special interest in Celeste, determined to get to the bottom of why she felt the need to create Flat Finn and what she's afraid will happen if she doesn't have him by her side (talking to him) every minute of every day. Finn himself is off traveling the world and his communications with Julie via Facebook had me grinning ferociously. As it happens, this book engaged every one of my emotions. The romance is of the heart-palpitating variety, somehow managing to be sweet, genuine, and seriously intense all at the same time. And even as I laughed out loud at one of Finn's many digital witticisms or one of Celeste's oddball contraction-free responses, fear crept up on me reading from behind. Fear of what Julie would find and that her finding it would shatter the fragile peace Matty, Celeste, Erin, Roger, and Finn had constructed. I wiped tears away more than once, and my love for every single one of the characters only grew and never diminished. Flat-Out Love is not only incredibly addicting but packs an emotional punch I felt in my gut for days after. Highly, highly recommended.