For Darkness Shows the Stars by Diana Peterfreund 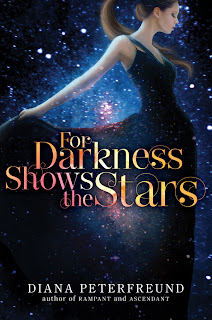 I know this is an almost unpardonably early review. But honestly, I waited on it as long as I possibly could before the effort of holding it in caused me some sort of bodily harm. I've been anxiously looking forward to For Darkness Shows the Stars for going on two years now, and the day an ARC showed up on my doorstep was just a very good day indeed. When a book you've been dying to read finally falls into your lap, do you ever just hold onto it and savor the possibilities? I do. I did with this one for a little while. Don't get me wrong, sometimes I just tear into it immediately. But sometimes I don't. Because sometimes dreaming about it while you're actually holding it in your hands is special, too. So I savored and I dreamt and I started reading and . . . I was gone. My first reaction to finishing it was a sense of complete satisfaction mingled with sadness that it was over. My second was thinking that I cannot wait to see For Darkness Shows the Stars work its magic on readers far and wide. As post-apocalyptic retellings of classics go, it pretty much killed it on all levels for this devoted Austen girl.

Elliot North knows how to work hard. As a member of the elite Luddite nobility, she has a keen sense of what is expected of her, of which actions are acceptable and which ones could get you disowned and out on the streets. It is that very sense of duty that kept her from following her childhood friend Kai four years ago, when he fled servitude on her father's estate for a life of uncertainty and, just possibly, freedom. Their friendship was forbidden from the beginning, as Kai belongs to the Post-Reductionist class, and ever since the catastrophic Reduction, matters or birth and class ruthlessly define every aspect of a person's life. But now, four long years have passed, and at eighteen years old, Elliot is the only thing keeping the family lands going. As her father and sister grow further distanced from reality, the world as they know it is changing. Determined not to be left behind, Elliot convinces her family to lease the land to a group of unusual shipwrights known as Cloud Fleet. Hoping the extra income will save her home, Elliot is, well, gobsmacked when one of the renowned shipwrights turns out to be none other than her old friend--no longer playful, open Kai, but smart, remote Captain Malakai Wentforth. Elliot knows how to work hard, but even she may not be up to the task of withstanding the flood of guilt and longing that threatens to overtake her with his return. Especially given the suspicions that being to swirl in her head regarding just what he and his fleet are up to.

Everything about this book soars, from its supernal setting to the dreams its characters hold in their hearts. Having read (and adored) Persuasion for years now, it was extremely gratifying to see the massive amounts of care and thought that went into the crafting of this story inspired by Jane Austen's final novel. In fact, I felt a healthy dose of admiration for the storytelling the entire time I was reading it. But the wonderful bit is that it won me over on its own strengths entirely. The world and its sinister history, the characters and their eerily perfect names, the writing and its effortless flow--they're all so interlocked and balanced, coming together so as to make hours go by like seconds. I may have been predisposed to like Elliot, but the way my heart launched itself into my throat when hers did, the way my temper rose on her behalf, and the way I held my breath at her restraint and cheered her adamant refusal to be downtrodden . . . I more-than-liked Elliot. I more-than-liked Kai (even when I wanted to hurt him). And most of all, I more-than-liked the brilliant ending. Here is one of my favorite non-spoilery passages, in which you get a feel for the way the writing lauds the original while extending it to support the strengths of these new characters and their spectacular world:


Elliot had had enough. "If you can't be civil to me, Miss Phoenix, I wish you'd leave me in peace. I have never done anything to you, and if you seek to punish me for past misdeeds, there is nothing you can devise that I haven't already suffered." Four years of worrying about Kai, followed by all these weeks of having him back here, but hating her. Was that not punishment enough?

"You baffle me, Miss Elliot," Andromeda replied in the same high-wrought tone. "I can't reconcile the young woman I see before me with the reports I have had."

What lies had Kai been spreading abroad? "I'm sorry to hear that, but it's none of my concern. I am the same person I've always been." She turned her face away from Andromeda, away from the crowd and from Kai. "Maybe you should ask yourself why, if I am the person you've been led to believe, someone would put their faith in me at all?"

"People are foolish when it comes to love."

Elliot hadn't been. She'd been rational, logical, reasonable, prudent. She'd been cold and cruel and disloyal and distant.

She hadn't been foolish.

She'd been the most foolish girl on the island.

Great, no? The killer thing about Elliot (have I mentioned how much I love her?) is that she has all the layers. She's the perfect blend of unmitigated strength and harbored regret. Every moment of every day she embodies dedication and resolve, all the while trying to mask the hope and the pain she lives with every moment of every single day. Here is Elliot:


No one came. Not her sister or her father, not Benedict or the Fleet Posts or even Admiral Innovation. No one appeared in the hall all afternoon but the mute, shuffling figures of the Reduced housemaids as they went about their chores. Time passed, and Elliot sat in the chair, waiting for the verdict from Felicia.

How much of her life had she spent waiting? Waiting for a plant to sprout? Waiting for her father's judgment? Waiting for another letter to appear in the knothole from Kai? Waiting for years after Kai left to feel at peace with her decision? She fed the Reduced, she did her chores, she avoided her father and her sister, and she waited. She did every duty she'd been taught as a Luddite, and she lied with every breath.

I'd say I don't know what to say, but I do. And it's this. Snatch it up the day it comes out--this beautiful book--this meticulous, breathtaking retelling of one of the greatest love stories ever penned.

Lastly, I just want to thank Diana (from the bottom of my heart) for page 117. Got it in one!

For Darkness Shows the Stars is due out June 12th.