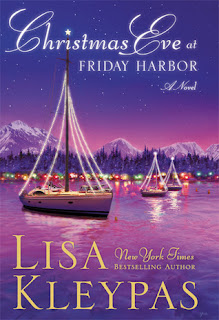 I won this book awhile back in a giveaway over at The Happily Ever After. It's a slender little hardback novella by Lisa Kleypas, an author I've read all of one book by. To be honest, I wasn't all that enthused by that one, and I haven't been back since. But something about Christine's review of this one made me think it might be time to give Ms. Kleypas another shot. And what better way to do that than with a genre I don't think I've actually ever read before: a Christmas-themed contemporary romance novella? Right? Never say never, though. So it arrived, and I let it sit on my nightstand for a few months (naturally). And (naturally) when it was basically the polar opposite of Christmas, I decided to pick it up and have a go. I was not disappointed.

After his sister dies in a car accident, Mark Nolan finds himself appointed the guardian of his six-year-old niece Holly. Though the Nolan family was never what you'd call tight, he and his brother Sam agree to do their best to raise Holly. After the initial shock wears off, that is. Carting the child back to their home where Mark owns a coffee shop and Sam a fledgling vineyard, the two brothers take up serious unclehood. Enter Maggie Collins. Maggie owns a local toy star and makes the acquaintance of the Nolan threesome when Mark takes Holly there one day to pick out a toy. Maggie and the persistently silent Holly make a connection, and their paths begin to cross over and over again. But attachment to a kid or a man is not anywhere in the cards as far as Maggie is concerned. Having lost her husband to cancer two years ago, she's not remotely interested in risking heartbreak on any level. Not again. But the stars seem to align when it comes to Maggie and the Nolans.

At first I was skeptical. The title, the setup, even the cover gave me the cheesy feelings in abundance. Hence my somewhat subconscious reluctance to pick it up. But the inside didn't make me feel cheesy at all. What it felt was sweet and earnest, which I never object to when it's done well. It was here. The characters were nuanced and strong. The setting was lovely and the writing smooth and incredibly pleasing. My only complaint is that it wasn't longer. I would have quite happily spent more time with Maggie and Mark and Holly and Sam. And I felt like it was a real missed opportunity to open this series with a novella, particularly when Ms. Kleypas had as much excellent meat and potential as she did here. There was just so much more I wanted to more, so much back story and paths left unexplored. But as one of my all-time favorite characters is fond of saying, "Not much meat on her, but what's there is cherce." As it was, I enjoyed every last word of this lovely story, even if in the back of my mind the extended version played with all its haunting possibilities. That said, the re-readability factor actually feels quite high to me. I can easily see myself pulling this slim volume out again at Christmastime and cozying in for a pleasant few hours. In the meantime, I plan on tracking down a copy of the next book in the series (a full-length novel this time)--Rainshadow Road--very shortly. I think this might be the beginning of a beautiful friendship.

Linkage
Babbling About Books, and More - " . . . a sweet and fast read, but it's missing that spark"
Book Obsessed - " . . . a nice, light-hearted read."
The Brunette Librarian - " . . . not to be missed."
Dear Author - "Christmas Eve at Friday Harbor has enough material for a whole novel packed into its shorter length."
The Happily Ever After - "I can't imagine anyone reading this novel and not enjoying the hours spent in Friday Harbor with these characters"