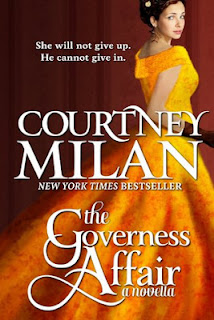 This is the part where I tell you I have secretly become a Courtney Milan fangirl. That's right. I've been rather callously reading up a storm of Milan behind your backs. But it's okay. Because now I'm coming clean. The thing is, they're just so readily available for download to my Nook. And I had heard such positive feedback--kind of across the board. But more importantly, I love Milan's blog. I love it. She writes about things. About the industry and about her experience self-publishing after already establishing herself as a traditionally published author. Her take on writing and publishing is always incisive and insightful. So I was a regular reader of her blog long before I ever thought of picking up one of her books. That's actually not the first time I've found myself in such a situation. But in this case, it took quite awhile before I decided to go ahead and see if her fiction was as good as her non. So far I've only torn a path through her Turner Brothers series. But I was excited to hear she had a brand new one in the works, and I downloaded the introductory novella as soon as it became available.

Serena has gone about as long as she can without gainful employment. With a reclusive sister to support and a secret or two she'd rather keep under wraps, she does the only thing she can think of to do. She goes to the doorstep of the man responsible for the loss of her last position as governess and demands her due. The only problem is, the duke in question won't see her. He doesn't see anyone it seems. Rather, he delegates the whole of his affairs to a man known to all and sundry as the Wolf of Clermont. The Wolf has a secret or two of his own, but these days he makes his living (and his reputation) on the strength of his abilities as a formidable businessman. He cares for no one and nothing but burnishing his intimidating reputation and brooking no refusal when it comes to the duke's affairs. And so when faced with a single governess demanding a paltry payment, Hugo Marshall doesn't  break stride moving to get rid of her. But Serena won't go. Doggedly focused, she returns every day to the duke's residence and waits. And as he becomes more acquainted with Miss Barton and her situation, somehow, something in Hugo balks at destroying her. And so he must weigh his plans for the future against offering the help this woman so clearly needs.

What a marvelous find Courtney Milan was. Not only is she a remarkably consistent writer, but her prose is buttery soft. It goes down so smooth, you find yourself downing a hundred pages without even realizing it. In a very short period of time, I have come to be able to count on Courtney Milan for delightful historical romances about smart women I respect and men who are both complicated and kind. They may be in a bit of denial when it comes to the kindness, but it is there and it is real. Even better, her novellas are as meaty and satisfying as her full-length novels--a rare skill and one I heartily admire. Serena and Hugo have to be two of my very favorite Milan protagonists. Serena's earnest, quiet drive and Hugo's single-minded determination and reluctant sympathy immediately appealed to me. Here, a favorite snippet in which they both show a little of their mettle:


Hugo reached down and plucked a spare twig from the ground and set it on the bench between them. "This," he said, "is a wall, and I will not cross it."

Her eyes fixed on that piece of wood, a few scant inches in length.

"I don't believe in hurting women," he said.

She did not respond.

"I do a great many things, and I'm not proud of many of them. But I don't swear. I don't drink. And I don't hurt women. I don't do any of those things because my father did every one." He held her eyes as he spoke. "Now I've told you something that nobody else in London knows. Surely you can return the favor. What is it you want?"

She shook her head slowly. "No, Mr. Marshall. I will not be browbeaten, however nicely you do it. I am done with things happening to me. From here on out, I am going to happen to things."

I love them. I love them both. I think this is the quietest of Milan's books that I've read, and I am so fond of it because of that. Because it, it's characters, and it's author resisted being flashy, opting for still, deep waters instead. I said her novellas are surprisingly satisfying, but that doesn't mean I couldn't have read about Serena and Hugo for many more pages. Because I could have. And would have. As always, I'm a bit sad the first full-length novel in the series won't be about them. But Ms. Milan's backlist has taught me she comes through. And so it is with the surest anticipation that I look forward to encountering the Brothers Sinister in the very near future.

Linkage
The Bookpushers - "All in all, this was a damn good read with intelligent characters and writing that leaves you wanting more."
The Brazen Bookworm - "Courtney Milan creates a relationship and set of circumstances that provides for what promises to be a stunning set of books."
Dear Author - "I loved how smart both Serena and Hugo were."
Feminist Fairy Tale Reviews - "These two people admire and respect each other's intelligence and personality."
Medieval Bookworm - " . . . a fantastic way to spend an hour or two."
Smart Bitches, Trashy Books - "' Well written' does not begin to describe this story."
Smexy Books - "This was not a good story for a novella, it was a fantastic story - period."