Review: Under the Light by Laura Whitcomb 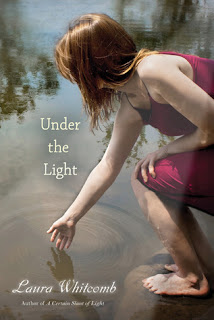 It doesn't happen very often in life, that utterly unexpected sequel that drops in your lap years after the original book came out. Most of the time, you discover series you love and blow through them at lightning speed and then are left to pick up the shattered pieces of yourself when the whole glorious thing is over. Or you stumble across gold with the very first book and are forced to not-so-patiently wait one year (or more) for each new installment. But occasionally an author hits you with one out of left field. I first read and adored A Certain Slant of Light not too long after it was published in 2006. It felt like a perfectly contained standalone novel to me at the time. And it still is. If you only read that one, you will be left content. But there are a couple of . . . I hesitate to call them side characters . . . that you certainly would not object to spending more time with, if you know what I mean (series addicts: I know you know what I mean.) So when I discovered that Laura Whitcomb was writing a companion novel (sequel of sorts) told from one of those character's perspectives, well. I was more than okay with it.

Jenny is not okay. Having returned to her body after unexpectedly vacating it for a period of time, she has no real recollection of what happened in the interim. All she knows is that she was . . . gone . . . for awhile. And when she came back, there was a boy who seemed to know her but not know her. Billy held in his hand a Polaroid of the two of them together. They looked happy. They looked like they belonged together. And yet Jenny and Billy do not know each other. They don't have the kind of shared memories that the photograph suggests. Instead, what they have is a disturbingly similar (if different in the details) history of shame, painful family issues, and a longing for escape. And, as it turns out, Billy was gone for awhile, too. What they begin to discover is that a fair bit happened while they were away. And one of the presences involved is not through involving herself in their lives. Meanwhile, real life has gone on around them. Jenny's father has moved out and is threatening (as he always has) to control everything about her life. Billy's brother is suspicious (as he always is) of his little brother's activities. The two lost teens attempt to get to know one another and, perhaps, puzzle out their bizarre connection. But it seems the ramifications of the events they have no memory of will impede their fledgling attempts and impact their presents in very real and unsettling ways.


And that's where every ghost story begins, with a death.

Laura Whitcomb uses all her words and that is all there is to it. It was so comforting (and not a little emotional) to be back inside the beautiful canopy of language she creates. Somehow she manages to return us to that absolutely unique atmosphere evoked in A Certain Slant of Light, and it is as though we were never away. Helen is a point of view character this time around as well, and it was easy to fall back into the cadence of her thoughts. But since I felt her story resolved nicely in the last book, Jenny was the one I really wanted to be with. So it proved to be somewhat of a distraction when Helen's presence in the story occasionally threatened to overwhelm Jenny's. I fully understood her preoccupation with Jenny's fate, but I could have done with a little less from her directly. Because when Helen fades into the background and allows us an unfettered view of Jenny and Billy together . . . it is magnetic. As in the final chapter of A Certain Slant of Light, the bond between these two is breathtakingly tentative. I would have followed them anywhere they wanted to go. And Whitcomb does take them places, beyond the boundaries of time and space, in fact. A favorite passage that takes place fairly early on and far, far away:


He lifted his foot and rested it over my ankle, gently pinning me down.

Then he pointed into the heavens. "Want to go there?"

"That star." He gave his finger an extra stretch toward the dozens of stars in that general direction. "The one by those other two stars."

"What do you mean?" I lifted my arm so it was touching his, our hands and fingers aligned, and pointed. "That one?"

"No," he complained. Then he swiped his fingers across our view of the sky, like he was flicking away a speck of dust or a drop of water, and the night surged forward. The stars, staying perfectly aligned, curved across the sky--time had sped into the future an hour.

I gasped at this and grabbed his hand, pulling it back toward our bodies as if he might accidentally throw the earth off its rotation. The stars slowed again, appearing to have stopped.

"How did you do that?" I whispered.

"I took us somewhere we hadn't been yet," he said. "Forward in time."

He said it so matter-of-factly, but the idea made me shiver on the inside.

"Just a little," he reassured me.

"Thats . . . so cool." I pointed at one particularly bright star and gave it a push with my fingertip in the air. The map of stars glided forward again, constellations staying aligned as they gracefully passed over us, not a long way, just a bit into the tail of the night, an hour or two closer to morning.

He made a sound of alarm, a fake cry, and then laughed, "Here." He lifted his arm to mind, our hands together, our index fingers pointing up. As one, without saying aloud what we would do, we moved the stars a few minutes westward, then froze. "Look what we can do together," he said.

And so while the story spends a rather unnecessary amount of time detailing Helen's anxieties and desires for her former host, it redeems itself by winding its way around again to the heart of this sequel--two shell-shocked and lonely young people who find each other and, in each other, hope.

Linkage
Babbling About Books, and More - "The ending will make you smile and possibly shed a tear."
Ink and Page - "I felt lulled, pulled along, enchanted."
The Midnight Garden - "This sequel is astonishingly complete and wholly satisfying."
The Readventurer - "The last chapter is just gorgeous. But the plot, the plot! Where art thou?"