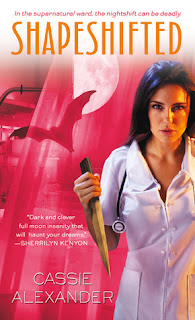 I do not know how Cassie Alexander manages to serve up two installments in her wonderful Edie Spence series each year, but I am not one to look a gift horse in the mouth. Please to be continuing in this vein, Ms. Alexander! Because this series just gets better and better. And finishing Shapeshifted knowing I still have Deadshifted to look forward to at the end of this year just fills me with both gratitude and excitement. I worry about my favorite urban fantasy heroines. I worry. I am frequently forced to be away from them at times when I would really rather not leave. And when it comes to Edie, that was getting to be pretty much all the time. Her life was fairly decently fractured at the end of the last book. I wasn't sure how she would cope with the enforced changes, and I wondered how long she would spend on the outside once things started up again in the new book. The questions that occupy my mind, you guys. You wouldn't know it to look at me, but it's a cacophony in here. So when Shapeshifted landed on my doorstep, I spent next to no time at all clearing my night (and my TBR) in order to dive right in.

A word: some species of spoiler is virtually impossible to avoid at this point. You have been warned.

No one believes Edie's story. Not that she's talking that much. She is seeing a therapist to try to deal with the . . . issues . . . that plague her. But even her therapist's open mind isn't wide enough to fit the host of supernatural creatures that make up her day-to-day life. Or at least that used to. Having been effectively shunned by the Creepy Crawly Community at large (and having lost her job at their hands), Edie is understandably finding it difficult to move on. Grasping at the ropes of her old life, she begins searching for work in a less hostile environment. The trouble is--after spending that long living on a constant surge of adrenalin, the sleep clinic she's temping for just is not holding her attention. At all. And so when an opportunity at an underfunded inner city clinic arises, she jumps at the chance. The weird thing is that, even though he hired her, the new boss doesn't seem to want her around much. To say nothing of the skeleton staff who openly scorn her ability to hack it in her new environment. And it does appear that she's landed in very much the wrong part of town when it comes to health. Vampire gang wars rule this section of the city, and old grudges die hard. A mysterious local deity known as Santa Muerte seems to have an unusual control over the poor denizens of the city, and everyone walks in fear of the unknown. No stranger to fear, Edie plunges into the chaos, determined to find answers to several of her most burning questions.


I just wasn't good at keeping track of people. The fact that no one ever seemed to keep track of me either was not lost on me.

It's quiet observations such as this one that make my heart hurt for Edie. They seem to form the rails on which she runs. They're also why I love her so darn much. She can be blindingly frank and impossibly cagey all in the same breath. When faced with a steaming pile of crap (which is oftener than she would like), she calls shenanigans.

And so I find myself grinning and grimacing in equal measure while following her exploits. Similar to my beloved Kate Daniels series, the world Edie inhabits is . . . messy. People die in the most undignified of ways. Monsters (both human and otherwise) stalk the dark alleyways. And no one is glossy or polished by a long shot. Even the smoothest of shifters, as we find out in this volume, run up against walls they cannot scale. And so while Edie is flawed and eminently breakable, so are the shifting, swirling creatures around her. It makes for an equity I find monumentally appealing (and often missing in paranormals at large). I did wonder a little at first at the meandering buildup in this one. Pleased to see a familiar face here and there, the new ones took up a lot of page time and I wasn't sure how attached I was willing to get. But I soon began to appreciate the myriad threads being woven together, and when a turn I didn't see coming presented itself in all its sudden glory, I gasped aloud (sending DH into a fit of snickers). It was a good turn. And it was pretty much Point of No Return from that moment on. The marvelous climaxes and denouements in this series impress the hell out of me. This one, in particular, had me holding my breath for the outcome I discovered I wanted so badly. When it comes to urban fantasy, I want to feel all the feelings and I want them close to the vest while I feel them. It's a tall order, I know. But Cassie Alexander knows what's up.

Shapeshifted is out today!

Linkage
Between Dreams and Reality - "Cassie Alexander always has a perfect control of her story and her world."
The Nocturnal Library - "I am a huge fan of this series."