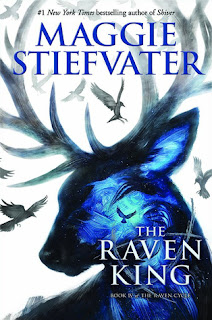 I thought I was done with the crying when I finished The Raven King last night at an only slightly ungodly hour. But then this morning I got up and I just didn't know what to do. And when I realized I had to sit down and write about how this book made me feel, the tears start welling up again. Honestly, Aaron will likely never let me read another series aloud to him again for all the tears he carefully wiped off my cheeks with this one. I am not a huge book crier as a rule, and I did not cry reading the other three. But it wasn't so much the sadness as it was the saying goodbye. I hate saying goodbye. Even though I am a serial rereader, there is no escaping that particular goodbye that comes at the end of a series that has meant . . . more than a lot. That contains characters I have loved the precise way I have loved these ones. These boys. That Blue. This incredible writing that makes me want to prowl the streets at night reciting passages aloud to the stars. I hated waking up this morning. Because it meant we all had to move on. And I really didn't know what to do.

I just can't see any way to avoid all the spoilers at this point, lovelies. But I do try. We have arrived at the final volume. Vos admonitos.

Richard Gansey III knows. He knows this is the closest he's ever been, or may ever be, to finding Glendower. He knows if he doesn't take matters into his own hands, Ronan Lynch will most definitely not graduate Aglionby Academy. He knows the precise texture and feel of Blue Sargent's laughter on his skin. He knows Adam Parrish's bargain with the mystical forest Cabeswater could play out in even more heretofore unexpected ways than it already has. And he knows the odds are better than even he may not survive to see any of these things happen. But, being Gansey, he presses forward nonetheless, determined to find his sleeping king, extract his favor, and see the friends he loves so well possessed of the things they need to survive with or without him. And, to his continual if grateful bemusement, so do said friends. Even as a preponderance of ruthless personages come to roost in Henrietta. Even as Gansey and Blue continue to bash up against the wall that is telling their friends about their feelings for one another. Even as Ronan spends more and more time at the Barns, Adam spends more and more time with Ronan, and both of them spend more and more time within the darkening vines of Cabeswater. Even as an unusual and overeager classmate makes indefatigable advances on the tight-knit group as a whole, And so, reinforced as they are by each other, they draw inexorably closer to the uncertain fate that has always awaited them.

Depending on where you begin the story, it's about my undying love for Ronan Lynch. Ever since the very first pages of The Raven Boys, I have loved Ronan. In English. In Latin. In every single one of the languages on his crazy puzzle box. And I can't help but be utterly unsurprised (and proud, in an odd way) at how this final volume seemed to say so much of it was Ronan's story at heart.


Of all the options in the world, Ronan Lynch was the most difficult version of any of them.

Depending on where you begin the story, it's about my gut-wrenching love for Adam Parrish. Adam, too, I fell in love with on contact. While others have questioned his choices, his motivations, his endless stubborn drive and solitude, I have soaked up every one. If I had the most fears and questions when it came to Adam's fate, it was because I unquestionably identify with him the most.


Need was Adam's baseline, his resting pulse. Love was a privilege. Adam was privileged; he did not want to give it up. He wanted to remember again and again how it felt.

But no matter where you begin the story, it's about Maggie Stiefvater's astounding skill with words, her characters that live and breathe so loudly and fiercely that they feel inviolably real, and the marvelous story in which they are entwined. The Raven King clocks in at a perfectly healthy 438 pages, and it feels funny to say that the entirety of those unfold at a breakneck pace. There are, of course, those trademark moments of indolent splendor, of quiet breaths held and exhaled. But I maintain, the experience of reading the novel remains one of rushing toward a conclusion no one, the reader least of all, is prepared for. But it comes. It comes. It comes. In the sweetest and gentlest of exchanges between Gansey and Blue. In the terrifying and violent passes through Cabeswater. In the exquisite light of fireflies dotting the air around the Barns as words rise up and burst inside Ronan. If The Dream Thieves made it possible for me to love and follow Gansey by showing me why each of the boys and Blue loved and followed him, The Raven King shows Gansey why. And it was such a beautiful artistic choice—here at the end—to show the king just what he had wrought. To hold the mirror (in all its forms) up, so that he could see the beautiful and strange constellation he and his quest had made of their lives.

I wanted so much. I wanted, I wanted. And even though the previous books in the series taught me to be afraid on all possible fronts, there were moments in this one that gave me new reasons. There were also moments that surpassed my expectation with their perfect rightness. And there were new gifts, given at a point when I thought I had passed the time when I could ask for more. But I should have known better. When it comes to Stiefvater's writing and this series, there is always more. The point was the longing, the packing into a single book, into a single series, the feeling of knowing and of being known. The feeling of finding, of waking, of wanting, of home.

Linkage
The Book Nut - "Maggie Stiefvater has come up with an ending that is so perfect for the series, that captures everything, that ends it so wonderfully, that I am genuinely sad that I will not get to visit this world again."
Gone with the Words - "When you can see little dots connecting all over the series like its own sort of ley line. It’s very rewarding."