I'm always delighted to have Rose Lerner visit the blog because she writes some of my very favorite historical romances. Today's visit is special because I get to take part in the blog tour for Gambled Away—a brand new anthology of novellas featuring women and men who find themselves wagered in a game of chance.


Get revenge. Pay a debt. Save a soul. Lose your heart.

Spanning centuries and continents, five brand-new novellas from beloved historical romance authors tell the stories of men and women who find themselves wagered in a game of chance and are forced to play for the highest stakes of all: love.

“Gideon and the Den of Thieves” by Joanna Bourne London, 1793 – Soldier of fortune Gideon Gage has come home from halfway around the world, fully prepared to face down a ruthless gang to save his sister. But there’s one member of the gang he could never have been prepared for: fascinating Aimée, driven from her own home by the French Revolution and desperately in need of his help.

“Raising The Stakes” by Isabel Cooper California, 1938 — When the flute she won in last night’s poker game unexpectedly summons an elven warrior bound to her service, two-bit con artist Sam takes quick advantage. With Talathan’s fairy powers at her command, her shakedown of a crooked preacher is a sure thing…but would she rather take a gamble on love?

“All or Nothing” by Rose Lerner England, 1819 – Architect Simon Radcliffe-Gould needs someone to pose as his mistress so he can actually get some work done at a scandalous house party. Irrepressible gambling den hostess Maggie da Silva would rather be his mistress, but she’ll take what she can get…

“The Liar’s Dice” by Jeannie Lin Tang Dynasty China, 849 A.D. — Lady Bai’s first taste of freedom brings her face to face with murder. A dangerous and enigmatic stranger becomes her closest ally as she investigates the crime, but can she trust her heart or her instincts when everyone is playing a game of liar’s dice?

“Redeemed” by Molly O’Keefe Denver, 1868 — After agonizing years in the Civil War’s surgical tents, Union doctor James Madison has nothing left to lose. But when beautiful, tortured Helen Winters is the prize in a high-stakes game of poker, he goes all in to save her—and maybe his own soul. 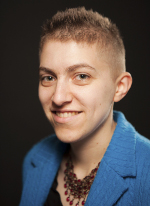 Maggie da Silva, my heroine in "All or Nothing" (the novella I contributed to the Gambled Away anthology), is a little bit of a Regency hipster. She and her friend Meyer Hennipzeel run a seedy gambling den on the outskirts of London with a French Revolution theme. They dress in flashy 1780s and 90s vintage fashion and decorate with once-opulent, now hopelessly passé furniture.

I got the idea because I learned while researching my last book (about a maid and a valet) that working-class people during the Regency still wore essentially eighteenth-century styles even though haute couture had completely changed its entire silhouette in the meantime. (You can see an 1805 engraving illustrating this posted by Isobel Carr here.) This was probably largely because new clothes were so expensive, but it means that everyday people were wearing had a lot more variety of style and silhouette than what you'd see at Almack's, where everyone was wearing this year's fashions.

Which means someone must have been reusing those lavish 1790s clothes full of embroidery and stripes and enormous buttons!

When I looked for recognizable elements of hipsterism in the Regency, I started to spot them here and there. A certain angry "counter-cultural" world-weariness, love of irony, and cynical fascination with excess seems to pop up with regularity in history--from the Restoration rakes, to the French decadent poets who liked to épaterla bourgeoisie (shock the middle class) by writing poems about anarchy and sex workers or walking turtles on leashes at the mall (yes this was a thing), to the Bright Young Things of the 1920s and 30s.

Is it a coincidence that those examples all follow on the heels of traumatizing periods of economic depression, social upheaval, or war? Probably not. The most notable hipsters from around the Regency period are the Incroyables and Merveilleuses from the French Directoire. Wikipedia says:

Whether as catharsis or in a need to reconnect with other survivors of the Reign of Terror, they greeted the new regime with an outbreak of luxury, decadence, and even silliness. They held hundreds of balls and started fashion trends in clothing and mannerisms that today seem exaggerated...

Ornate carriages reappeared on the streets of Paris the day after the execution (28 July 1794) of Maximilien Robespierre...There were masters and servants once more in Paris, and the city erupted in a furor of pleasure-seeking and entertainment. Theaters thrived, and popular music satirized the excesses of the Revolution...

Many public balls were bals des victimes at which young aristocrats who had lost loved ones to the guillotine danced in mourning dress or wore black armbands, greeting one another with violent movements of the head as if in decapitation.

(Kate Beaton first pointed out the connection between Incroyables and hipsters to me in this glorious comic, by the way.)

But my very favorite Regency hipster will always be the author of a short 1818 book about cravat tying, Neckclothitania (which is a pun, because the subtitle is “Tietania” ahahahaha!). 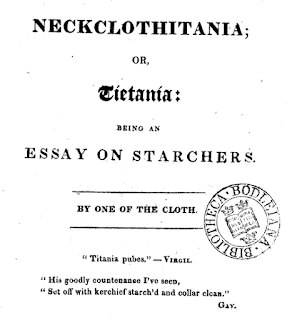 The author, who identifies himself only as "one of the cloth", is definitely both a very sincere cravat connoisseur and...a guy who knows how ridiculous that is and wants to make sure you know he knows. He gives detailed instructions and illustrations for a number of different knots and offers the best color of cloth to go with each one (which is how I found out that “thigh of aroused nymph” is a real Regency color name, as well as a rose varietal--just plain "thigh of nymph" roses are a less intense pink at the center).

Check out this series of jokes:

"Let any person take a stroll up and down some fashionable street of the metropolis, at the proper time of day, and remark the men who do and who do not wear starchers [i.e. starched cravats]: What a conscious sense of their own superiority in the former! What a full conviction of their own paltriness and insignificance in the latter!!

I shall now take leave of my readers, fully hoping, that they may derive some slight information, from the above few remarks which have occurred to me--If they do, I shall feel myself amply recompensed, for the sacrifice of the couple of hours which I have spent, in the composition of the foregoing pages."

Too cool for school! (But genuinely funny. I admit I got kind of fond of this douchebag by the time I got through the book. You can read the whole thing on Google books here.)

And look at this typeface choice! 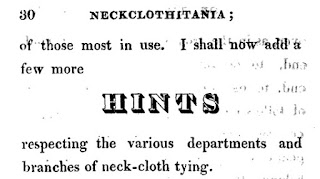 To me, the most interesting thing about this kind of self-conscious irony is the attempt to distance yourself from your own enthusiasm, as a self-protective mechanism. Maggie sees and relishes the ridiculous in what she's doing, but she also very genuinely loves her club and her wardrobe. When it hits her just how ironically her patrons have been enjoying her gambling den, to what degree slumming is part of the fun, it really hurts her feelings even though that's what she's been purposefully capitalizing on.

Just say you love cravats! Own it!

What's something you love, but you get embarrassed admitting it to other people so you make it into a joke? (I'll go first--I seem to have gotten into professional wrestling over the weekend. Give me a few weeks to get to the loud and proud stage. Right now I still feel like SUCH A DORK.)

Thank you so much, Rose. I completely and unrepentantly own my love of cravats. Now for the giveaway! Rose is kindly offering up two copies of Gambled Away to two lucky readers. To enter, simply fill out the Rafflecopter. The giveaway will be open through Monday, June 20th.

Find out more about the anthology here. Buy your very own copy here.