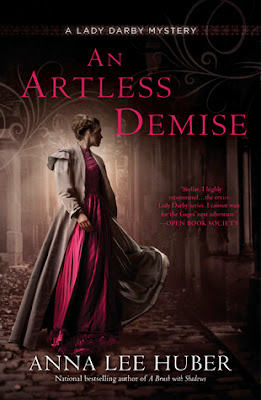 Today marks the release of An Artless Demise―the seventh installment in Anna Lee Huber's excellent Lady Darby mystery series. I'm happy to be participating in the blog tour with a giveaway courtesy of Berkley. This is a series I've enjoyed from the very beginning (you can read my review of the first book here). Be sure that Kiera and Gage are well worth your time, particularly if you are a fan of Deanna Raybourn or Tasha Alexander.

Kiera’s return to London is anything but mundane after fleeing in infamy more than two years ago. While Kiera expected the whispers and murmurs inspired by her reappearance, she wasn’t prepared to receive a letter of blackmail, threatening to divulge the secrets of her past and implicating her in crimes she didn’t commit. A gang of body snatchers is arrested on suspicion of killing people from the streets and selling the bodies to medical schools, and Kiera is a perfect suspect for their crimes―after all, she was previously married to a late anatomist. Now, Kiera fears for her own life, but also for her new husband and investigative partner, Sebastian Gage, and their unborn child.

Meanwhile, the young heir of a wealthy family has been found murdered, and the man’s relatives plead for Kiera and Gage to investigate. Is it a failed attempt by the London body snatchers, having left the body behind, or the crime of someone much closer to home?

CONNECT WITH ANNA
Website | Twitter | Facebook | Instagram
BUY THE BOOK
Amazon | Barnes & Noble | The Book Depository | Indiebound | Books-A-Million
GIVEAWAY
Berkley has kindly offered up one paperback copy to one lucky reader. The giveaway is open to U.S. and Canada addresses and will run through Tuesday, April 9th. To enter, simply fill out the Rafflecopter. Good luck and happy reading!