April 08, 2020
I haven't wanted to talk about this. With anyone. But I think I probably need to. That like Georgina, I need to use my words to break the curse. I think that like Sam, I need to believe in my cure. So I'm going to talk about it here, and maybe you can help. Since pandemic type things got real in my neck of the woods, I haven't been able to read. I haven't been able to reread. This has (and I am not exaggerating) never happened to me before in my life. I know it happens frequently to most everyone. And I have certainly always been a mood reader. It's not in any way uncommon for me to drift from book to book, from shelf to shelf in my library, until I land upon the right thing. But that drifting tends to occur over the course of a few hours. Not ever does it occur over the course of a few days or, God forbid, weeks. I feel like I'm losing my mind. And, yes, I am fully aware of where this problem likely rates on the triviality scale in the current scheme of things. But I figured if anyone would understand . . . and perhaps have experienced (or are experiencing) something similar. So I invite your words. As always. 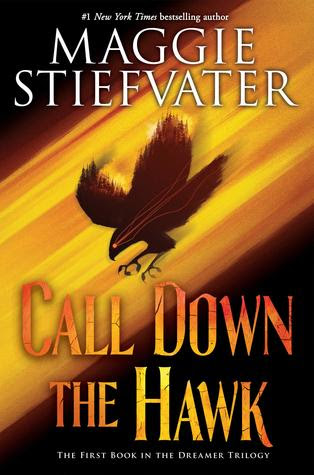 In the meantime, I thought I might use words to review some of the books that slipped through the increasingly large cracks of the past weeks and months. In lieu of reviewing what I would normally be reading in the moment, I thought I'd review some of the gems I read not long ago but neglected to feature here. Naturally, Maggie is the only place to start. I'm sure most of you have read Call Down the Hawk by now, but I've not had the chance to talk about it with that many people. And I would dearly love to. Because this book? This unrelenting adrenaline shot of Ronan in word form sort of exploded all over my life and left me hanging out here on the edge of a cliff until the sequel comes along to save us.
Note: If you haven't read the Raven Cycle yet, I really don't know what to say. I mean. This novel (and trilogy) is meant to stand on its own. And I am sure it does/will. But for the love of Gansey, do the right thing.
Ronan Lynch thinks he can do it. He thinks he can leave the Barns for short, controlled periods of time. Just long enough to visit Adam at Harvard, just long enough to check in on his brothers in DC, just long enough that the nightwash won't arrive and bleed out enough darkness that he won't wake up at all. But short and controlled have never really been in Ronan Lynch's playbook. And the spectacular failure of his first attempt casts the kind of pall they all struggle to shake. Meanwhile, his older brother Declan has broken the rules for the first time in his perfectly scripted life. An expert at short and controlled, he finds himself unable to go on not knowing the truth of the people in his life, his dreamer father, his dreamed mother, and his dreamless self. And as Declan dips his toes in waters deeper than he knows, a woman named Hennessy arrives in town complete with dreams and an agenda of her own. A number of them, in fact. All flawless copies. And as Hennessy's best friend Jordan finds herself tangled up in Declan's search for the past, Hennessy herself is running out of time. Because she and her dreams aren't the only new arrivals in town. A darkness is headed for the Lynch brothers and those unfortunate enough to be within striking distance when it finds them. A darkness with teeth both real and dreamt.

A dreamer, a dream, and Declan: that was the brothers Lynch.

Here's the first brilliant thing about this novel: it's as much Declan's story as it is Ronan's. And that fact thrills me right down to my toes. Because we have simply not been on the receiving end of enough Declan thus far in our journey with the brothers Lynch, and it was high time. And also the perfect time. I didn't expect Declan to be the next Lynch thread to unravel (and in so devastating a fashion), but I certainly admire the boy's style. Call Down the Hawk is a love letter to Declan Lynch and to those like him who love and are inevitably hurt by dreamers and the dreams they design. My heart broke over and over for Declan and the ever-rigid confines of the life his father left him. Which is why Jordan was such a gift to this tale. She's a forger and a thief and exactly the kind of person to whom Declan doesn't give the time of day. And she's placed squarely in the path he's treading toward the truth. Declan and Jordan's story glints in the light and creeps by in the shadows, and I am here for it every day of the week.

Declan Lynch knew he was boring.
He'd worked very hard to be that way, after all. It was a magic trick he didn't expect any prize from but survival, even as he looked at other lives and imagined them his. He didn't fool himself. He knew what he was allowed to do and to want and to put in his life.
He knew Jordan Hennessy didn't belong.
But still, when he came back from the National Gallery of Art to his empty town house, he closed the door behind him and for a moment he just leaned against it, eyes closed, pretending—no, not even pretending. He just didn't think. For one second of one minute of the day, he didn't run the probabilities and worst-case scenarios and possibilities and consequences. For one second of one minute of the day, he just let himself feel.
There it was:
Happiness.

This is the second brilliant thing about this novel: its arc bends toward Ronan Lynch not being alone. And I don't mean just in the sense of Adam Parrish and the Barns and home (though you all know I am never not meaning Adam Parrish and the Barns and home). But I also mean in the sense of his place in the world. We often think it was an oddly lonely thing to be Gansey, and it was so painfully lonely a thing to be Adam. But the Dreamer Trilogy opens reminding us how lonely it is to be Ronan, trapped in the place he loves most in the world and endangering the people he loves most with every night's sleep. And so if there is a ray of light in this wild car chase of a novel, it is that much like Blue Sargent discovering her father was a bit of a tree and magical with it, Ronan finds the world he lives in may not only be manipulable by himself and his father before him. There are other dreamers out there, not all of them (possibly none of them) as benevolent as he. And there are, perhaps inevitably, those who want to kill dreamers and who do so. Violence and a smile made for war. But if he can survive, there may be the hope of forging dreams together for that same boy who, "left to his own devices, manifested beautiful cars and beautiful birds and tender-hearted brothers."
And since it is a trilogy, we'll go with three brilliant things. This is the third one: I remember back when I wrote my review for The Dream Thieves, I said that it filled me with anxiety and murderous affection. Well, these essential elements are alive and kicking and have possibly taken some sort of Kavinsky-approved stimulant. But I know them. As Adam says, "Ronan, I know you." I know these characters, and I know these words and the way they connect to form a new thread in my life. There are new characters I am now coming to know and who I already love. There are those I hate as well. And, taken together, they fill in empty spaces and build up walls. They forge brilliant copies and dream swords to pull out of the air in the arc of my most perfect need. This is the third brilliant thing. Words and the magic they make. Maggie style. Which is to say beautiful from every angle and impossible to be perfectly replicated.