Review | Girl Before a Mirror by Liza Palmer 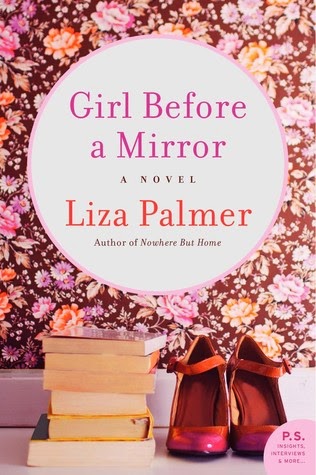 First review of the year, guys. I hereby promise you I chose a good one. In fact, I really feel as though I have exercised great restraint in waiting this long to review it. Due out in just under two weeks now, I decided I could wait no longer. It's not that I haven't made my feelings about Liza Palmer's books abundantly clear, because I know that I have. It's that her latest novel—Girl Before a Mirror—is so good it's giving her others a run for their money as my favorite (and I honestly didn't think my love for Nowhere But Home could be surpassed). So good I've already reread it once and am fending off a second reread even as I type this. There are other books out there, and they all deserve a chance. I know this, and I feel their call keenly. But. I had supreme difficulty letting go of this one, and I can see myself diving back in regularly and indefinitely just to spend time with these characters again and to experience Anna's hilarious and thoughtful journey along with her once more. It was just as good the second time around, and I know it will only wear better with time.

Anna Wyatt finds herself in the unenviable position of not having a clue what to wish for as she blows out the candle on her 40th birthday. Surrounded by her friends, their spouses, and her beloved (if beleaguered) younger brother Ferdie, Anna feels affectionate but a bit blank. A year into a self-imposed dating sabbatical, she's been taking stock of her life and cleaning house of anything (or anyone) extraneous. The result is she finds herself in an undeniably clean, but somewhat sterile place, in need of inspiration and not sure where to look. Hoping to advance at the ad agency where she works, she tracks down Lumineux Shower Gel—a dying product in need of revival. Saddled with hopeful newbie graphic designer/sidekick Sasha, Anna finds inspiration in the unlikely form of Sasha's well-read copy of bestselling romance novelist Helen Brubaker's new self-help book Be the Heroine, Find Your Hero. And before they know it, Anna and Sasha are on their way to Arizona and the annual RomanceCon. Pairing up with the con and Ms. Brubaker herself, Anna and Sasha wind up judging the Mr. RomanceCon competition, with the winner slated to be the new spokesman for Lumineux Shower Gel. Determined to seal the deal and make it out of Romance Land alive, Anna is in no way prepared for the exuberance of the convention, the viciousness of the Arizona heat, and the charming Britishness of one Mr. Lincoln Mallory with his blue oxford cloth shirts and his steady gaze.

The thing about Liza Palmer's protagonists is that they're all so very different, from each other and from me. They're in advertising, and they're pastry chefs, they work in prisons or in art restoration. And yet they are so very real, so full of the same questions and vague but earnest hopes and fears that I feel on a daily basis. And so we are comrades. And I care. I care so much from the very start. And Anna Wyatt, with her self-control and her clever mind and her Miss Marple Theory, was no exception. I had her back from page one, as she gazed around at the faces of her friends and tried not to let the gathering uncertainty show on her face. Her story is so compelling because it addresses, so humorously and with unadorned frankness, questions of control, empowerment, guilt, success, and love. Add in some seriously wonderful explorations of female friendship and sibling love and one truly epic romance convention, and you have got the kind of tale I couldn't look away from if my life depended on it. And then . . . there's Lincoln Mallory, who I love so much I start to drift when I think about him too closely. With those oxford cloth shirts and those tense hands in his pockets. At one point there are suspenders involved and . . . well. You'll meet him on your own, but here is one of my favorite of their hilarious and charming exchanges:


I stand in the lobby, flipping my phone around in my hands. I pull Lincoln's business card out of my purse. Again. I flip the card over and dial. My fingers are tingling and this terrified numbness pings throughout my body, settling in my toes. I swallow. And swallow. Blink my eyes. It's like I'm giving myself errands to run around my body so I won't—

"This is Lincoln Mallory." Vomit.

"I'm going to stop you there, love. I know who you are even without the reminder of apple breakfast time," he says. His voice is even better than I remember it.

"I apologize for my late call," I say, still not having taken a breath now going on nine minutes.

"I assumed you were busy at your Booty Ball." Lincoln Mallory saying booty will go down in history as one of my favorite things in the world.

"I've already eaten, but I did manage to get something for dessert."

"It's a surprise," he says. My face flushes. "When your Booty Ball ran long—a sentence I never thought I'd say, quite frankly—I had to strike out on the field trip on my own."

"So you're holding this dessert hostage."

"You make it sound so devious."

I scan the lobby. The hotel bar. The kiss. I close my eyes.

"But just for dessert."

"I do like a woman with her priorities in order." Silence. "Anna?"

These two. I mean. And it's always like this with them. The entire time I was reading I alternated between helpless laughter and a sort of fierce longing for their fears to be allayed, for their paths to somehow continue intersecting despite . . . everything. Because, of course, Lincoln's history is as mesmerizing and complicated as Anna's, and I felt every ounce of their combined and individual uneasiness and wanting. It is endlessly relieving to read about characters you would genuinely want to know, would want to sit with in a hotel bar or on a Manhattan sidewalk and just talk to. And I will never not appreciate how these two said what they wanted to, even if it came out mangled and fumbling, how they pursued their truth with an intentness I admire. For example:


I shut the car off and take a second, the blistering heat sitting on the top of my head like I'm under a heat lamp. I am walking toward the meet and greet when the phone rings.

"Anna Wyatt," I say, knowing exactly who it is without even looking at the screen.

"This is my formal apology," Lincoln says.

"I'm sorry." I like that Lincoln doesn't elaborate or get lost in a maze of buts and excuses for why what he did was actually okay. A simple I'm sorry is the most beautiful thing in the world.

It's these simple, thoughtful moments that make me pause as I'm reading to mark their effect (and possibly read them aloud to the nearest warm body so that I'm not alone in my wonder). Girl Before a Mirror is filled with them. I've decided the only way to start a new year is with an instant and permanent resident on my beloved bookshelf. Done and done.

Girl Before a Mirror is due out January 27th.

Linkage
Love is Not a Triangle - "I'm not sure I can even articulate how amazing and affirming this book was for me."